Nursing Sisters in Canada – The Story of Mabel Bruce Evans

Posted on November 5, 2018 by durhamregionareaarchivesgroup

When people recall World War I & II, many recall the men and women who bravely served and fought for their country during those dark periods in human history. Each community has different stories and experiences of local war heroes who shaped history with courage and strength. Once such example is Mabel Bruce Evans, war nurse and first superintendent of Bowmanville Hospital. 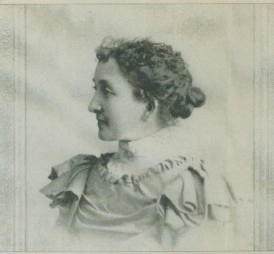 During World War I, many women trained and served as nurses on the front lines. The Canadian Nursing Sisters have a long history of dedicated women who braved the hardships of war to do their duty to their patients. According to Veteran Affairs Canada, “At the beginning of the war there were five Permanent Force nurses and 57 listed in reserve. By 1917, the Canadian Army Nursing Service included 2,030 nurses (1,886 overseas) with 203 on reserve. In total, 3,141 Canadian nurses volunteered their services.”[1] Nicknamed “blue birds” because of their blue dresses and white veils, these women served with courage and compassion during this dark time in history. Mabel Bruce was an honored member of this collective who served their country.[2] 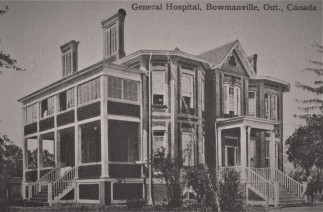 Mabel Bruce, born in Cartwright Township on July 29th 1878, trained as a nurse in St. Catharines and completed post graduate work at Bellevue Hospital in New York. Bowmanville Hospital opened on March 26th 1913, a project that came to fruition through the combined efforts of town council, J.W. Alexander’s (owner of the Dominion Organ and Piano Factory) donation of the house and property to establish the facility, and a successful fundraising campaign from the Ladies Auxiliary. At this time, Bruce took up her position as the first superintendent of the hospital, receiving $40 per month for her services.  During her time at the hospital she was responsible for teaching the first class of nurses.

Bruce was constantly regarded as giving herself to others in need throughout her career and personal life. In 1915, after war broke out overseas, she decided to enlist and become a Nursing Sister to help the war effort. She went to England and France as part of the first Canadian Field Ambulance. During the war she wrote many letters describing what life and what hospitals were like behind the lines. In one of her letters she discusses Christmas from the hospital of which she worked, “Christmas time we decorated our ward to represent a Canadian snowstorm. I was on night duty, so played the part of Santa Claus. We had bunches of cotton strung on thread and festooned from beams and rafters. This was in one of the huts where the serious cases are kept. The beams were hidden as much as possible by holly, mistletoe and ivy. At each man’s head hung a well filled sock with a drum, a teddy bear, a doll, or some thing to make them laugh sticking out at the top. Each sock contained candy, nuts, raisins, some useful article such as handkerchiefs. Into this fairy scene came our new arrivals, a convoy of wounded on stretchers, dirty, tired and weary, poor chappies. But all were delighted to arrive on such a Christmas.”

Mabel Bruce distinguished herself and her work, and for that she was honored with the Mons Star, service and victory medals and was presented with the Royal Red Cross by King George V at Buckingham Palace. The Royal Red Cross was a prestigious honor and was a medal that was awarded to nurses for their exceptional services, devotion, and professionalism in British military nursing.  This precious award was bestowed to only 5% of women who served in the War. After the War she married Charles G. M. Evans and they settled down and made a life for themselves in Manitoba, later in Victoria, British Columbia, where she continued to help others. Her knowledge of nursing and her experience made her an asset as there was no doctor in the area where she lived.

Mabel Bruce Evans died on June 2ND 1951 at the age of 72. Newspapers reported that she has been having health problems for quite some time “having undermined her strength by giving her skill, time and energies so freely to others all her life”. Mabel Bruce Evans medals and awards were given to the Bowmanville Hospital. Hospital volunteers paid to have them framed and hung nicely in the very hospital that she helped to start in 1913. Her legacy will forever continue on and will be remembered for how “The quiet assurance with which she met all problems inspired confidence and trust in all those under her care, and her untiring energy and devotion to duty will be long remembered by those privileged to associate with her.”

DRAAG is the professional group for archives and repositories of the local history of Durham Region and surrounding areas.
View all posts by durhamregionareaarchivesgroup →
This entry was posted in DRAAG Information and tagged Archives, Clarington, Members, Nursing Sisters, WWI. Bookmark the permalink.
Loading Comments...